The three memorials are to three of the ten children born to John Geddes and Jane Maconachie who married in 1827. The fourth memorial (the font) is to Alexander’s wife Frances Robertson Geddes. 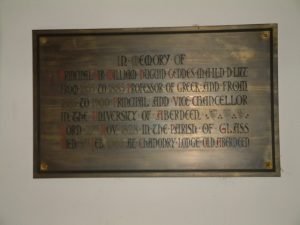 Sir William was born at Bodylair, Glass and named after his father’s great friend William Duguid (see Ministers of Glass). He was educated locally at Glass and Elgin before graduating at the age of 17 from Aberdeen University. After teaching at Gamrie he moved on in 1848 to become classical master at Aberdeen Grammar school and rector in 1853, then becoming Professor of Greek at King’s College, Aberdeen. He became vice-chancellor of the university in 1885 being responsible for many good works during his tenure. He was knighted in 1892.

Charlotte Geddes, William’s youngest sister, together with her sisters Margaret and Jane ran a successful finishing school in Dresden for young ladies. She married James Reid but retained a strong interest in Glass bequeathing both a sum of money to the Kiek for distribution among the poor of the parish and also a silver communion service. The whereabouts of these items is currently unknown. 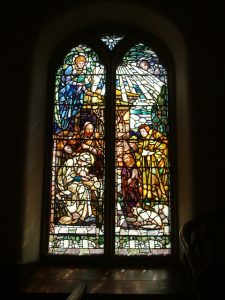 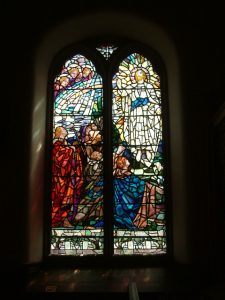 Alexander did not go on to further education and emigrated to North America when he was 17 to Montreal and thence to Chicago. His skills led him to become the head of grain broking business of enormous importance in Chicago where he was known as the Chicago Grain King.

He returned to Glass full time in 1880s using his wealth to purchase Invermarkie Farm and then Aswanley and Blairmore. He made many improvements to his properties including the building of his mansion Blairmore House in 1885. He married Frances Robertson Sharp in 1877 and they had 5 children; 2 sons both killed in the First World War (see memorials to war casualties) and 3 daughters.

Alexander died at Blairmore in 1902 and is buried at Wallakirk graveyard. 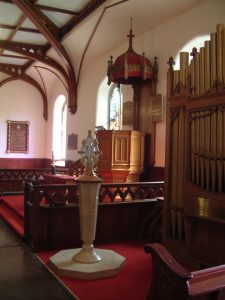 The daughter of Dr Sharp of Cullen, Frances married Alexander Geddes (see above) on 15th November 1877. She had a long association with the parish of Glass and was noted for her good works, her generosity and support for young people. The District Nursing Association, the W.R.I. and the Parish Hall Committee all benefited from her efforts.

The inscription around the base reads:

“To remember in love Frances Robertson Geddes with thankfulness for her life of high example. This font is given by her children to the church she greatly loved.” 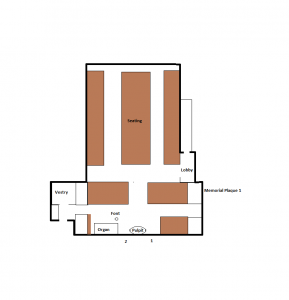