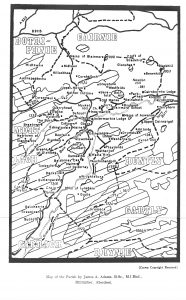 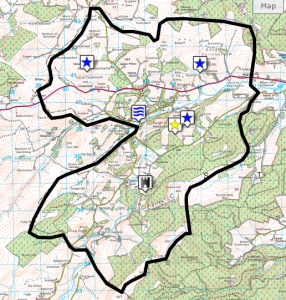 St. Andrew’s is the parish church for Glass and some thoughts about the parish itself are appropriate:

The Parish boundary encloses Mains of Blairmore to the north where it meets the neighbouring Parishes of Botriphnie and Cairnie. To the east it includes Mains of Cairnborrow, north of the River Deveron and Terryhorn to the south of the river, adjoining the parish of Huntly. From here the boundary runs south-west to include Lynebain, bordering with the parishes of Gartly, Rhynie and Cabrach. It turns north-east at Craig Watch with a large deviation which strangely puts the Haugh of Glass including Edinglassie Mains outside of the parish and in Mortlach Parish. This deviation follows the routes of the Burn of Edinglassie and the Markie Water.  The war memorial lies just inside the boundary which turns to the west to include Corsemaul from where it runs to the north to Mains of Blairmore.

The War Memorial to the men and women from the Parish who fought during the First and Second World Wars is to be found at the crossroads in the Haugh of Glass. It is a simple memorial listing the names of those who died. A tremendous amount of research has been carried out by local historian Marina Alexander and can be found by following the link to the Glass Community Association website here. Scroll down to find a wealth of information about many other  details of life in Glass. 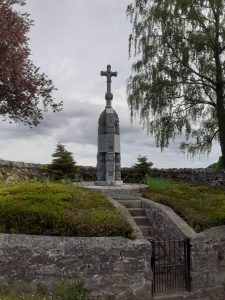 The crossroads by the War Memorial mark the meeting of one of the two original roads from Huntly (both heading towards Dufftown) with the road from Keith running south to the Cabrach. One road is recognisable today as the minor road running to the south of the Deveron via Malach and South Manse while the other to the north of the river is the road running past Aswanley. There is no sign yet of the modern road which runs past the ruin of the Market Inn. Several roads no longer exist. Click here to see an early map – which might make things clearer! 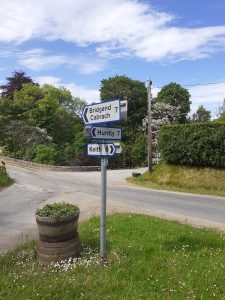