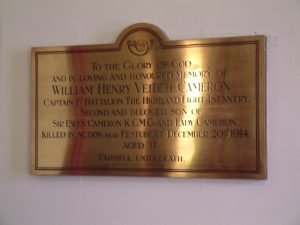 William Henry Veitch Cameron was a Captain in the 1st Battalion the Highland Light Infantry when he was killed in action during the first winter of the First World War aged 31.

William was the son of Sir Ewan Cameron and Lady Josephine Elizabeth Cameron. Their connection with Glass came about when William’s elder brother Ewan married Rachel Margaret Geddes the daughter of Alexander and Frances Geddes.

The elder son of Alexander and Frances Geddes, John was born in America and worked in his father’s grain business. He inherited Blairmore Estate on his father’s death in 1902. At the time of his own death in action John was a captain in 16th Battalion, the Scottish Canadian 79th Cameron Highlanders. He was killed in the 2nd Battle of Ypers on April 23rd 1915 aged 37.

Alexander (Alistair on the family memorial in Wallakirk Graveyard) like his brother John was educated at Rugby before going to Canada to work in Winnipeg and British Columbia. He joined the army (5th Battalion Northumberland Fusiliers) being wounded at the Battle of Ainse. He transferred on being commissioned to 2nd Battalion the Royal Scots Fusiliers and was killed in action near Givenchy on June 16th 1915 aged 24. 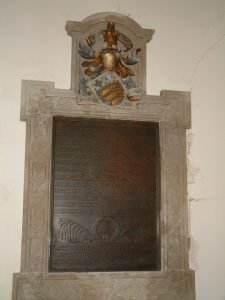 The only son of Mr and Mrs George Macpherson of Lloyd House, Wolverhampton and Edinglassie Lodge. George was born in 1896 and educated at Locker’s Park and Winchester, where he was in the O.T.C. Leaving there in July 1915 he obtained a commission in the Buffs on September 19th. In April 1916 he was transferred to the Machine Gun Corps where he was involved in testing the new tank weapons.

He became a lieutenant in July and went to the front at the end of August 1916. He died as a result of wounds sustained during the first tank offensive.

A memorial service was held in Glass Kirk where the Rev Guthrie took the service and Sir Frederick Bridge played the organ. 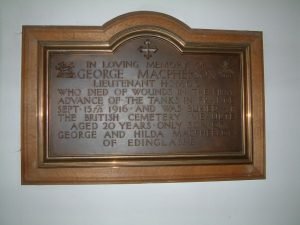